Queen of the Desert!

Dubai is a city and emirate in the United Arab Emirates known for luxury shopping, ultramodern architecture and a lively nightlife scene. Burj Khalifa, an 830m-tall tower, dominates the skyscraper-filled skyline. At its foot lies Dubai Fountain, with jets and lights choreographed to music. It is a beautiful city surrounded by deserts and sea. 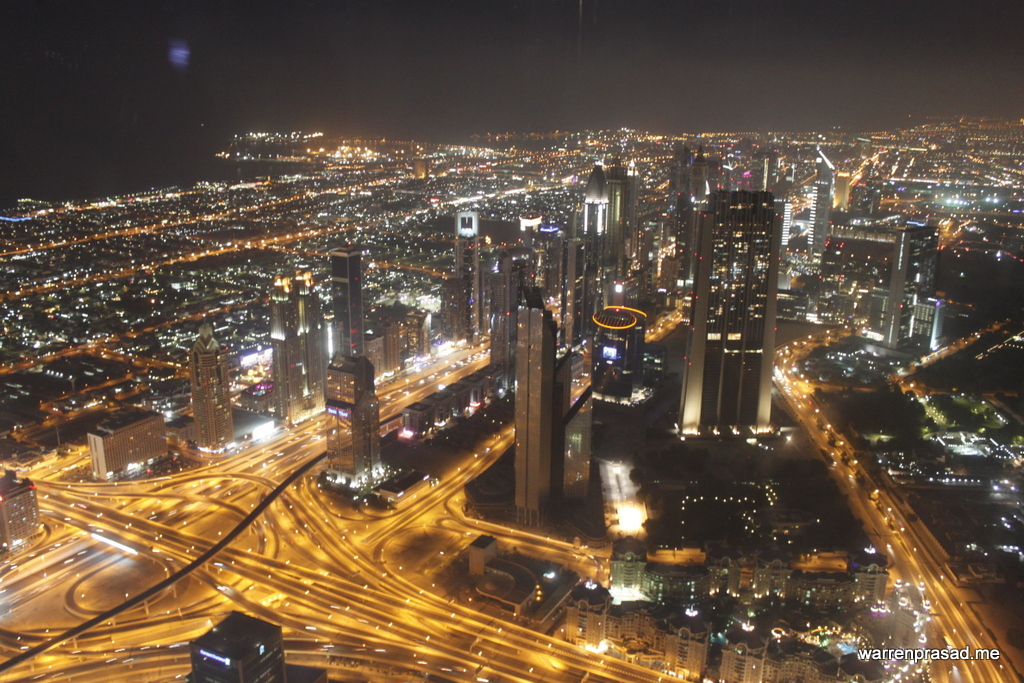 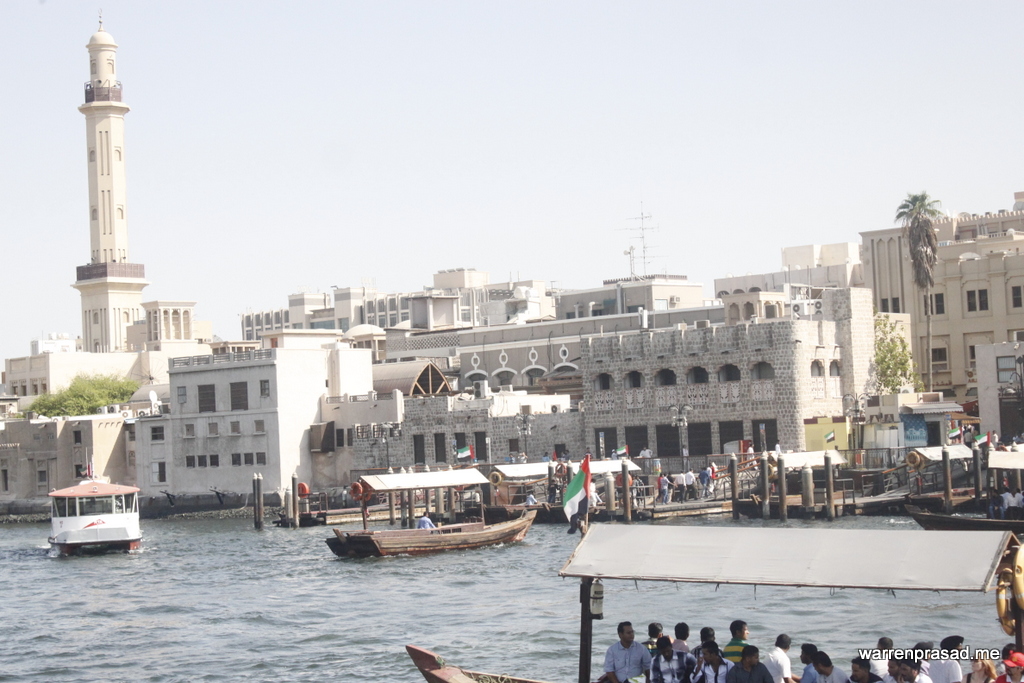 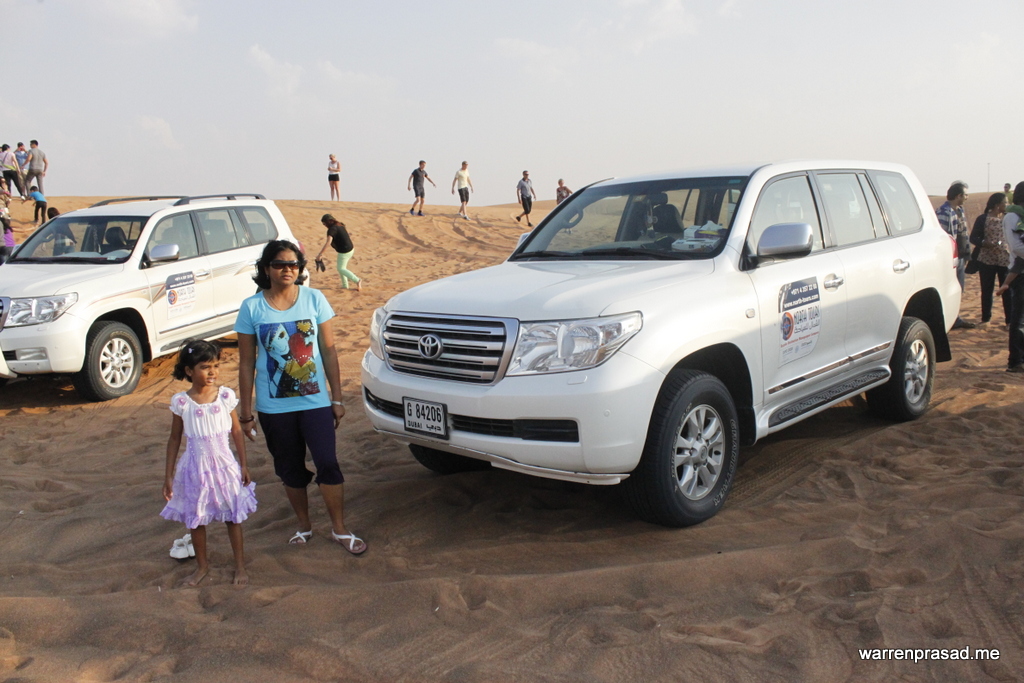 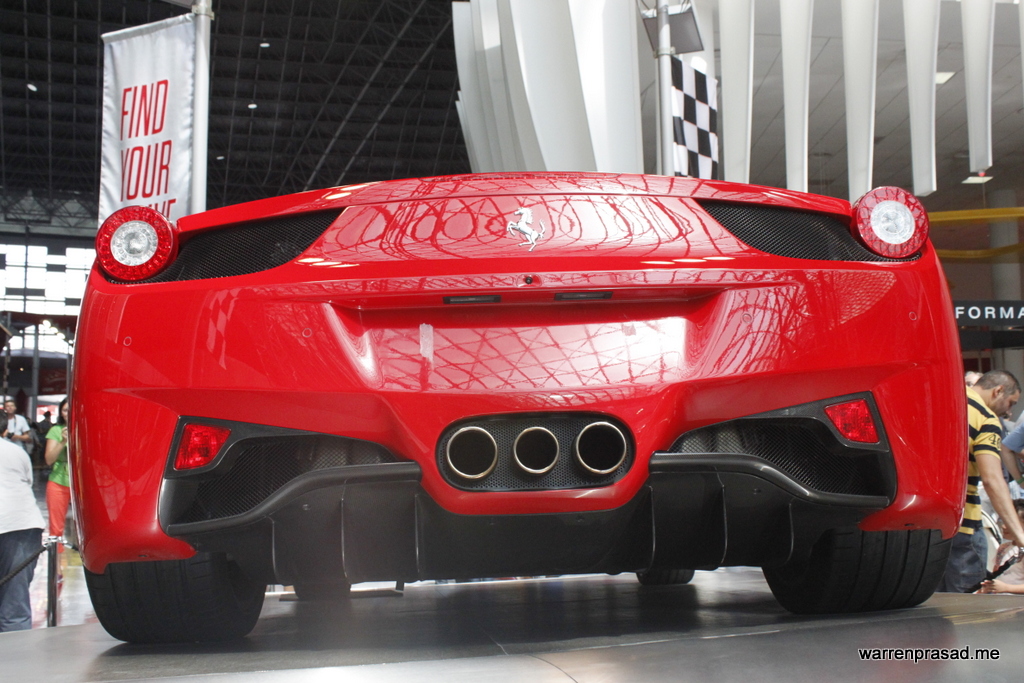 Date: 10th October 2013
(Pune -> Dubai)
It was bright Thursday noon and I was rushing to school to get my daughter. The packing was almost done, Taxi driver was calling up as a routine procedure to check the appointment. My 5 yr old was still in school busy with her mid term exams when I reached. she was almost done and I picked her and rushed back home. A quick lunch and again a call, from the taxi driver.

The journey had begun.

We got our VISA done from Marhaba Service in our town. It was expensive than VISA for countries of South east Asia but still cheaper than Europe and the US. The cost was INR 5.5K per pax.

It was Terminal 1 where we were disembarked. Being the oldest terminal of Dubai serving flights from south east Asia it was not comparable to ultra modern terminals 2 and 3 serving flights from west and emirates respectively. There was a long queue at emigration and it took almost 2 hours to get through it.We took a taxi to our hotel which was around 10 min drive from the airport. Hotel Tulip inn was a three star apartment hotel. We had taken a 1 bedroom apartment. It was nice with big rooms, fully equipped kitchen, clean toilets. A home away from home. It was 9 PM, time for dinner and deep slumber.

Dubai was waiting for us.

Date: 11th October 2013
We always prefer to take the public transport. It is not only cost effective but will also help you gel with the common. It lets you feel the city life. After having breakfast in hotel we left for the nearest Metro station. It was around 500 m from our hotel. We bought NOL cards for each one of us. This is a prepaid card and we chose silver card out of four options provided as silver card enabled us to use any mode of transport being run by RTA. For further detail please check the NOL website. 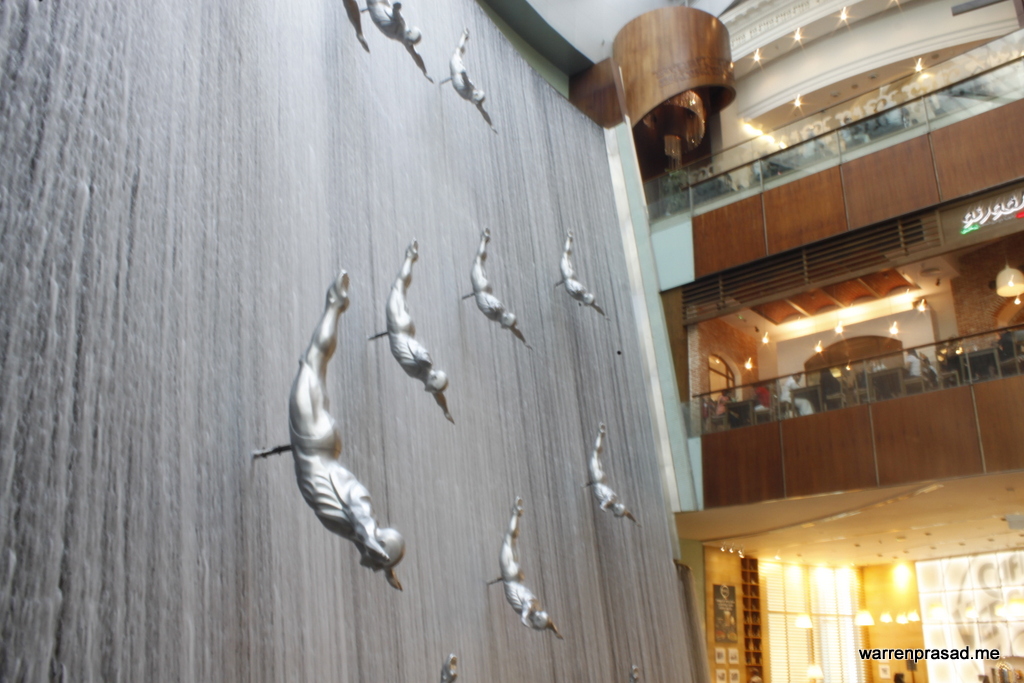 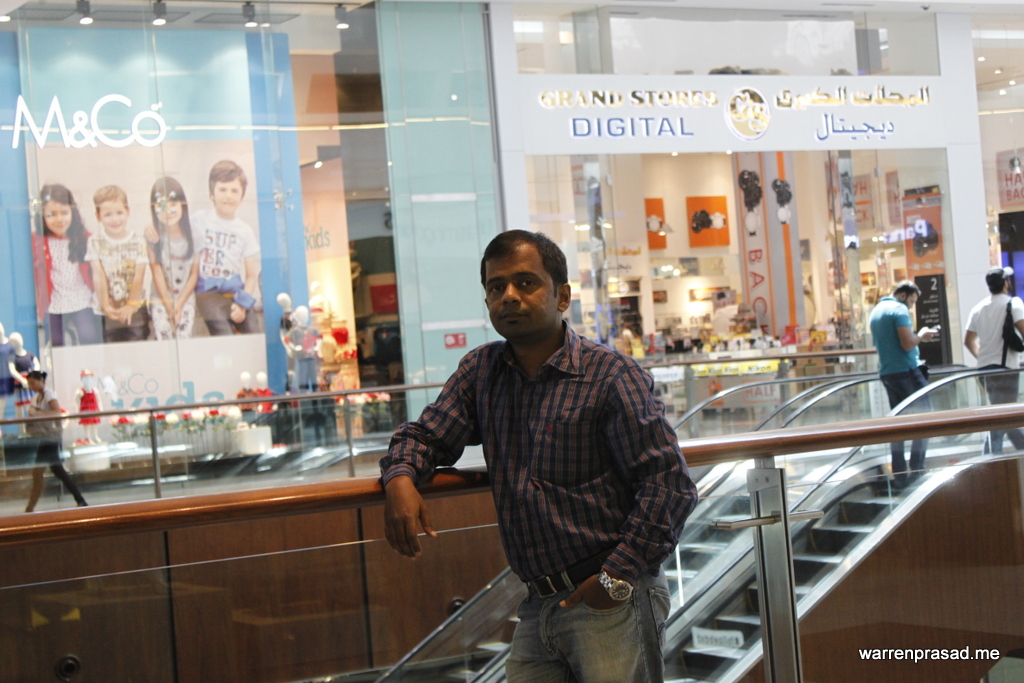 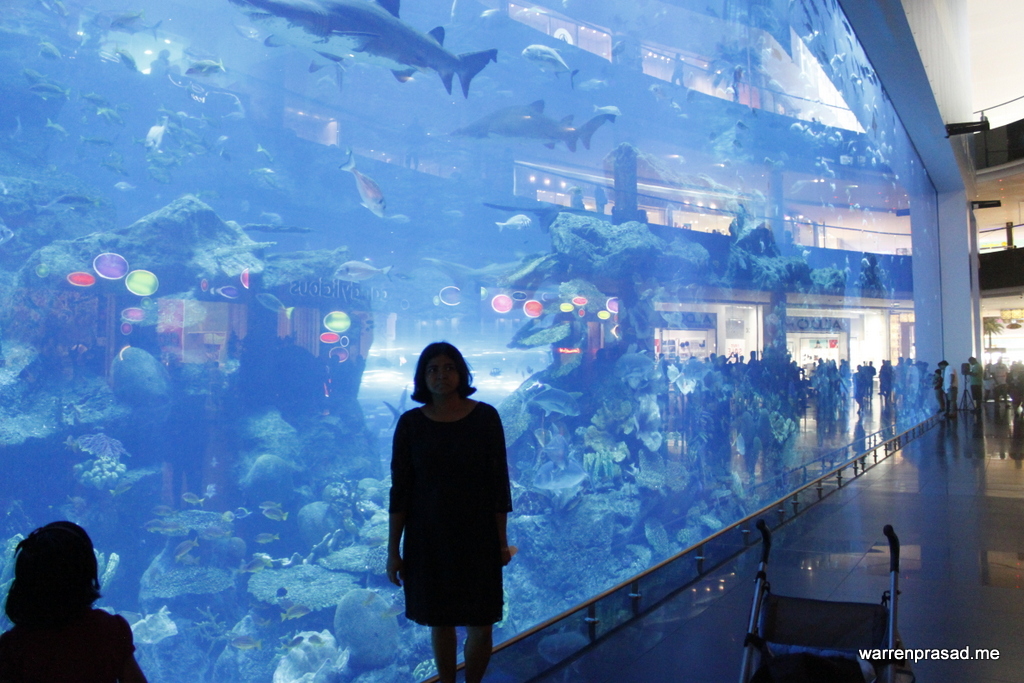 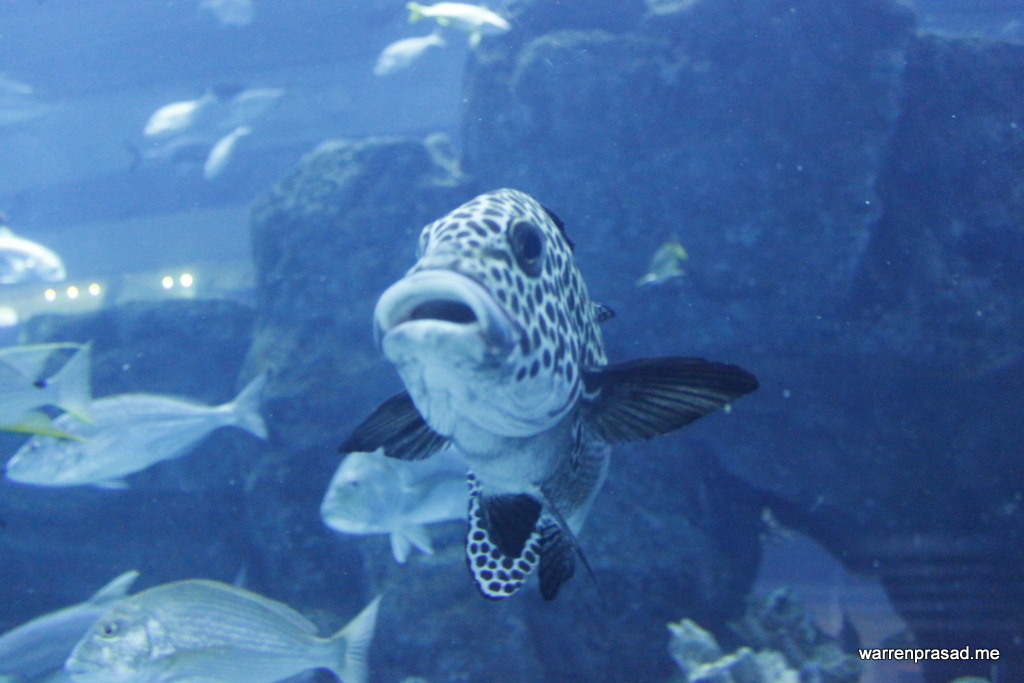 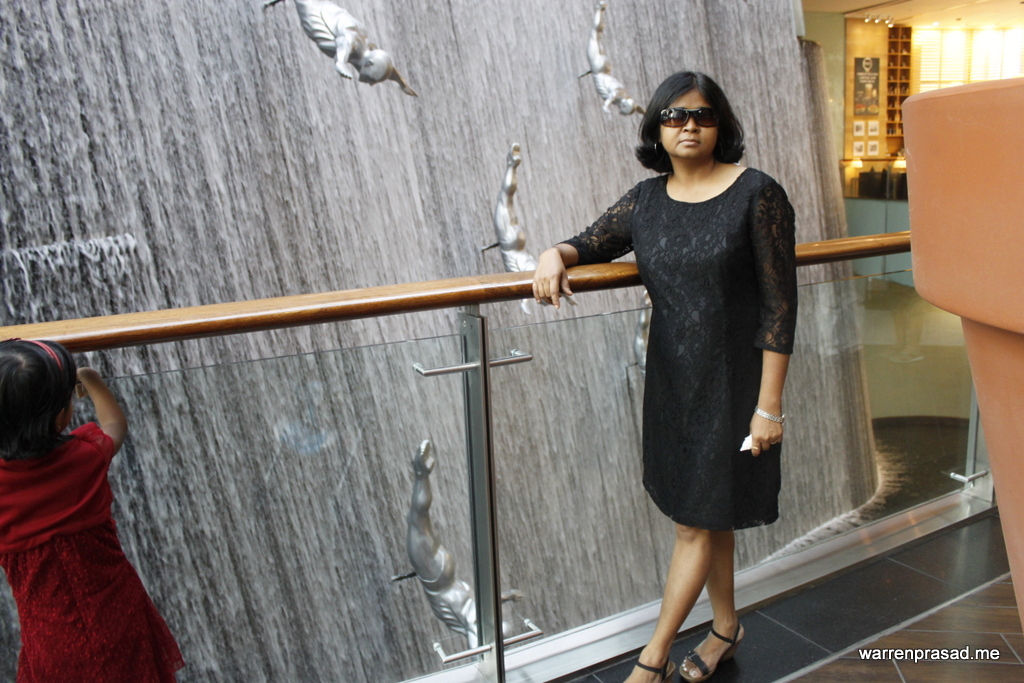 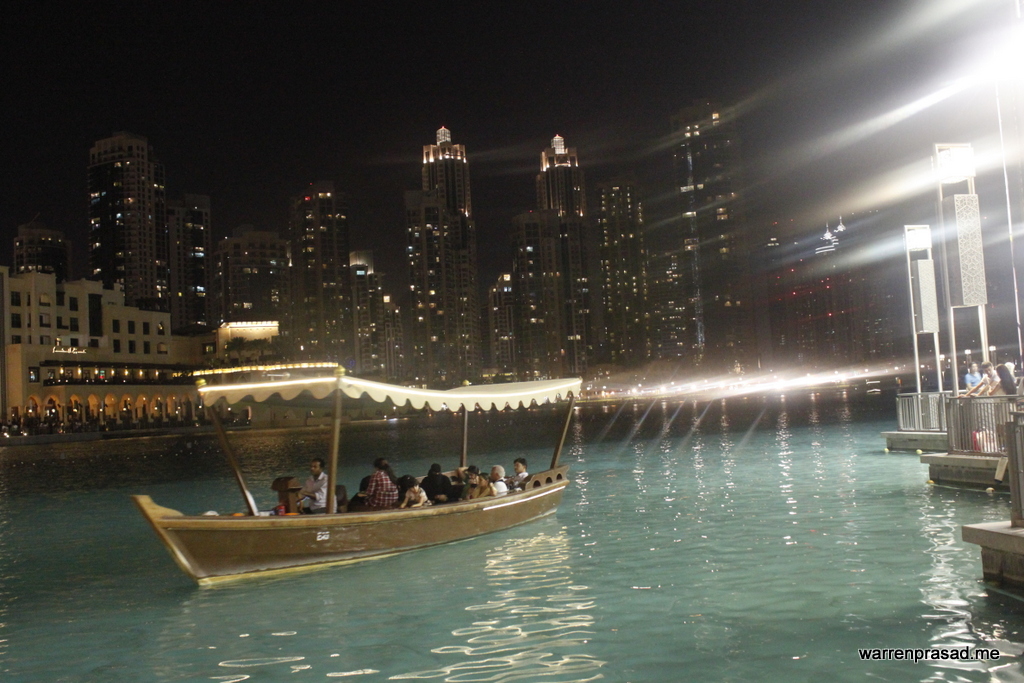 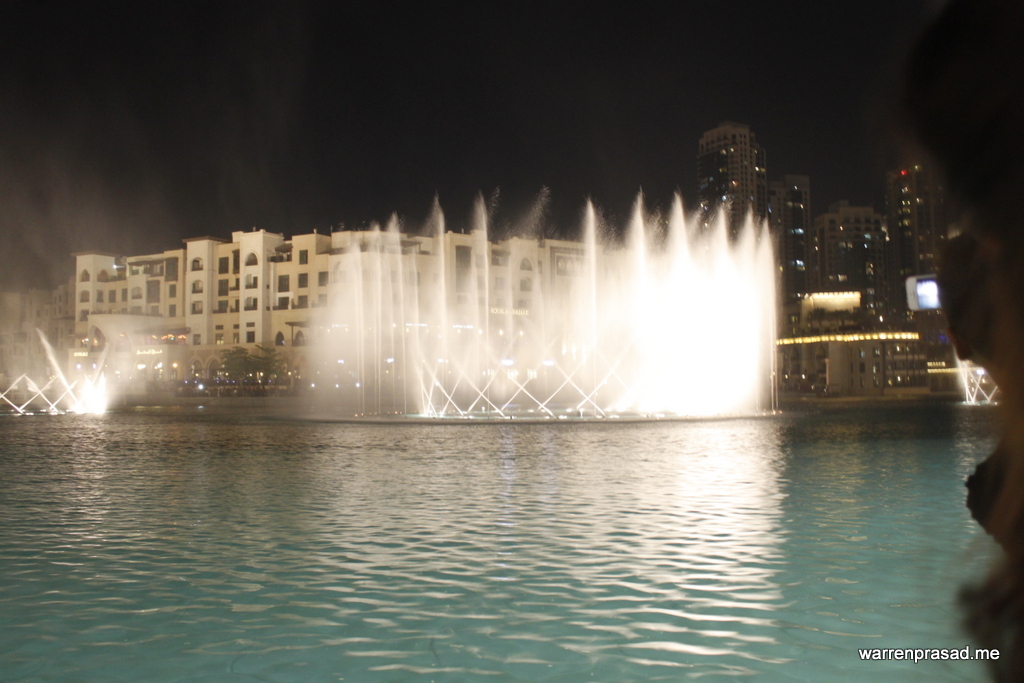 We took the train to Dubai mall. There was change over from green to red line at a station called Union. It took us approximately 20 min to reach Dubai Mall.

There is a foot bridge all the way from the metro station to Dubai Mall. And there it was the Larget Mall on this planet which houses more than 1200 shops, an ice rink, an aquarium with worlds largest acrylic glass, indoor theme parks, a multiplex and hundreds of restaurants and food joints. Dubai Mall was humongous. We had reached early at around 10:30AM and the noon rush had not yet reached the mall. We decided to visit the Dubai Aquarium before it becomes crowded. The ticket was priced at 80 AED, and you can stay as long as you want in the tunnel. The glass bottom boat ride would take 115 AED per head. The aquarium holds 10 million liters of water which houses around 33,000 sea creatures from tiger shark to Leopard ray and Potato Cod. An interesting array of fish at display.

Then we did some window shopping and Trisha my daughter bought something for her. For lunch we went to the Food Court. It houses some of the best cuisines and gives a range of dishes to pick from, right from local biryani to burgers from the US and Pizza and Pasta from Italy and from Chinese to European. We went for Iranian cuisine of grilled mutton and chicken with Iranian bread and curd, It was delicious. After filling our tummy we went to the Water Fall. An architectural master piece. A little more shopping and toy ride for the little one. We went into the Gold Souk. The ornaments and jewelry were expensive but the designs were simply superb, nothing that you can find in other parts of the world.

At 5:30 PM we started walking towards the Burj Khalifa entrance. Burj Khalifa has a direct entrance from the Dubai Mall for its observation deck. The sunset time is the time when the rush is at its peak. We found a long queue at the entrance. It took us almost 45 min to get to the elevator, A special elevator carries people to the 124th floor, the observation deck. It took 58 sec to reash 124th floor. It was crowded at the top too. But the view was awesome. Breathtaking ! We stayed for little more than 30 min before taking the elevator down. Next we walked toward the Dubai Musical Fountain. its a 10 min show which takes place right outside the mall. the show starts every 30 mins. It was a long day and we started our journey back to the hotel. Day 2 was over. 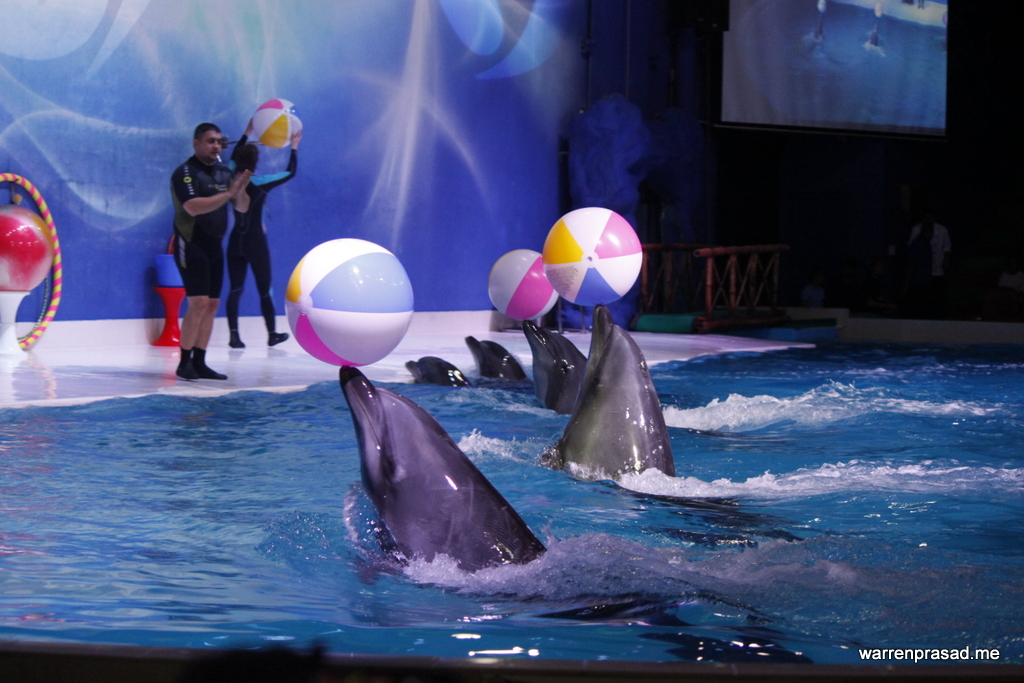 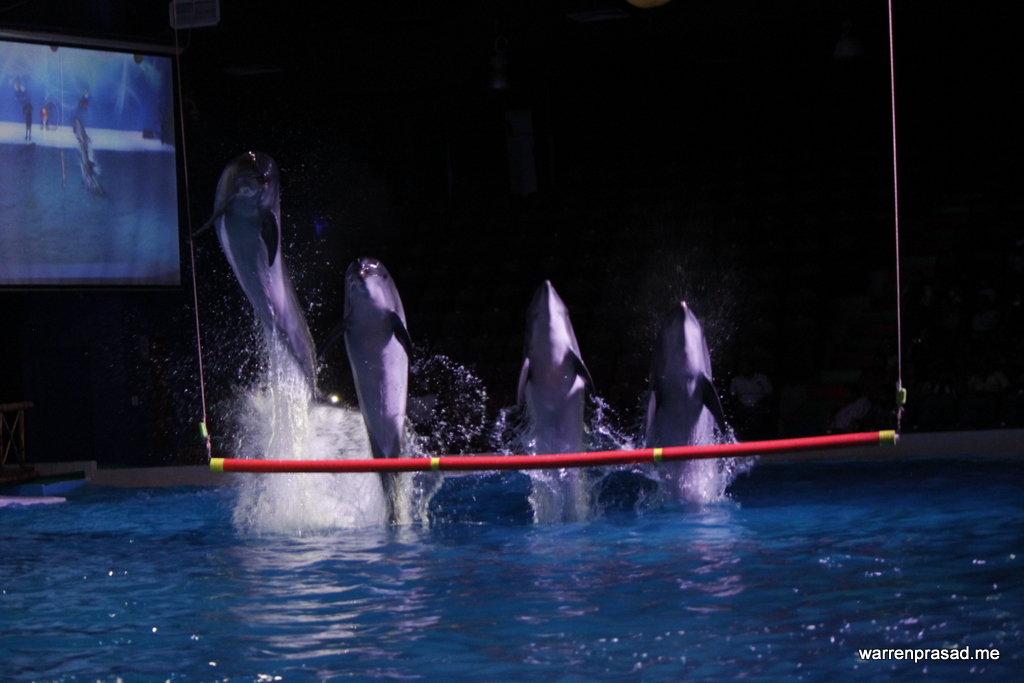 Date: 12th October 2013
GITEX is Dubai's bigget technology fair and 12th Oct was the last day. we did not wanted to miss the opportunity. Any way I am a gadget freak! We took a train to the World Trade Center were GITEX was hosted. It had a paid entrance and the cost was 60 AED per head. There were huge discounts in number of electronic devices. It had almost everything at disposal, from mobile phones to television and from kitchen appliances to car accessories. I bought a mobile phone, a Google Nexus 4 as my earlier Google Nexus S2 had reached its retirement conditions. The cost was less by around INR 5K as compared to Indian market.

We had our brunch and then we left for Dubai Creek Park. A beautiful landscape and lots of trees (which Dubai lacks in other places), the creek was literally a 'cool' place. The green grass pastures with shadows of trees makes it a perfect picnic spot to break out of city's mundane life. It also has a children's park and a hosts a dolphin show. When we reached the afternoon show was over and the next show was scheduled at 6 PM. It was Dolphin and Mermaid show with special effects. We bought the tickets which cost us 125 AED per person and went to the park to relax. The show started on time and was magnificent. The Seal and Dolphins were extremely well trained and gave a flaw less performance. It was a 1 hour show and got over by 7PM. After that we took a train back to hotel.

Date: 13th October 2013
We woke up early, it was a Ferrari day for us. We were going to Ferrari World in Abu Dhabi. It was about 2 hours drive and a bus would take 50 AED per pax from Dubai to Abu Dhabi. The bus leaves from a bus stand near Union Metro station. We took the first bus and left for Abu Dhabi. We got off before the bus entered the city and took a taxi to Ferrari World. 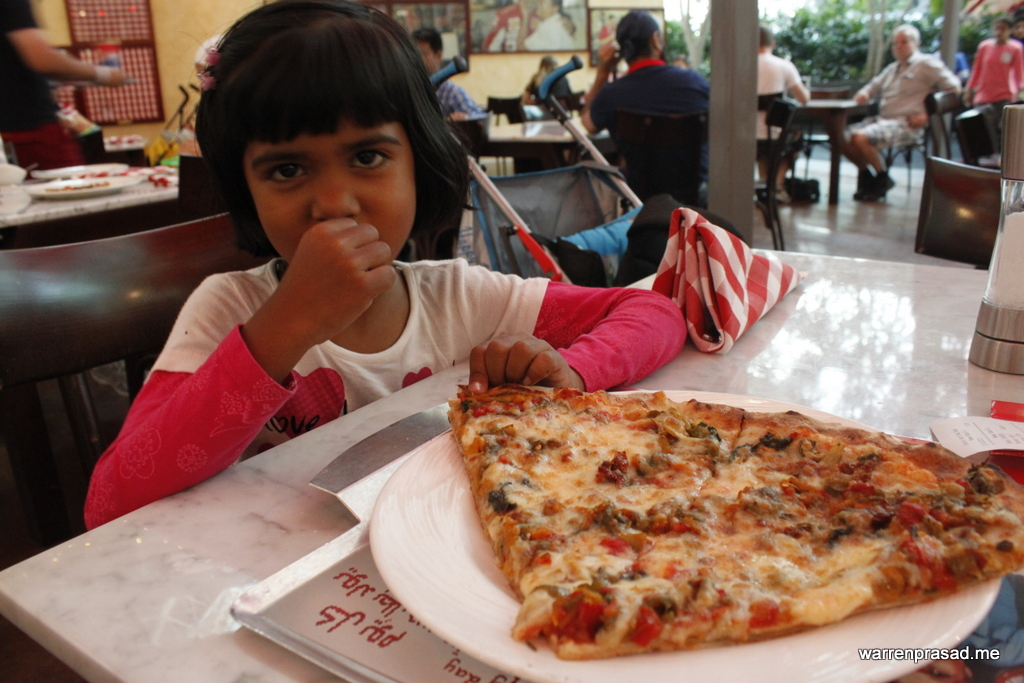 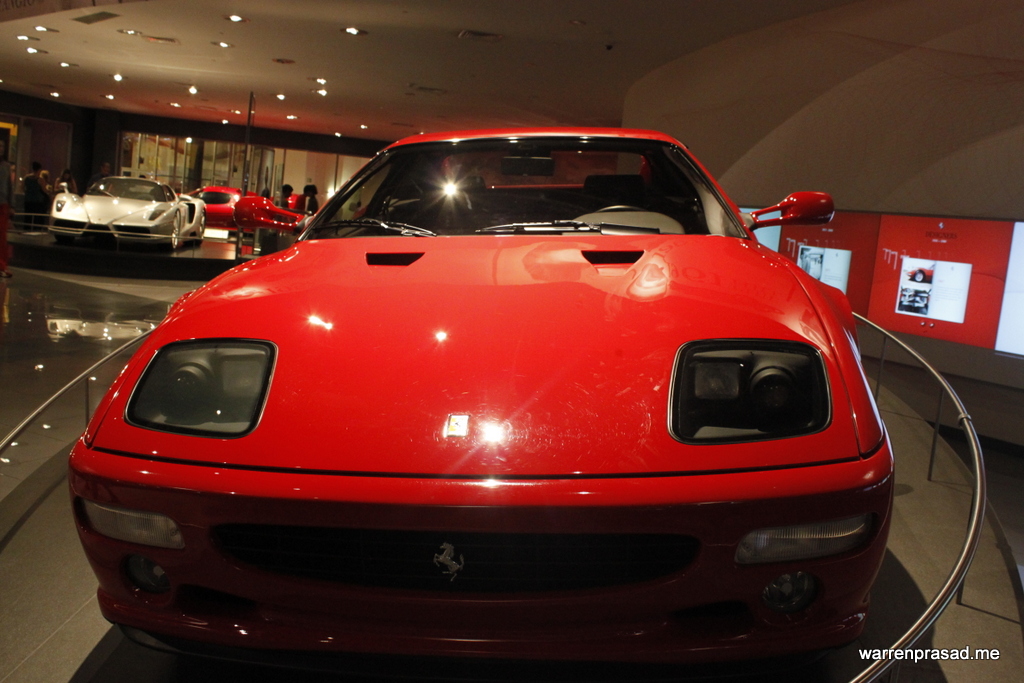 Its HUGE! Its the biggest roof in the world. A walk to the ticket house and we found a long queue. Ticket for an adult costs AED 240 and for kid its AED 195. The main attractions are Formula Rossa, Florara GT challenge and numerous other rides. For kids junior GT is must. The over all experience was not so great! The park was not upto the expectation. we had expected more thrilling rides and it certainly did not live upto the word Ferrari. The food was great with authentic Italian Pizza at Mama Rossella. After an exhaustive day and number of clicks of the italian beauties (cars ;-) we took a bus back to Dubai. 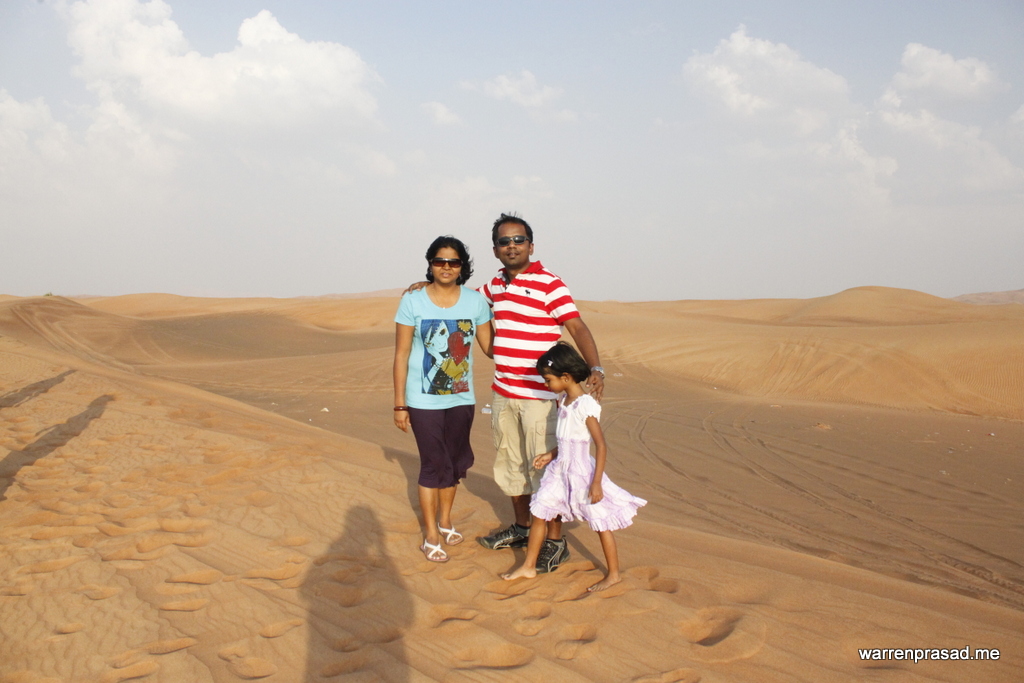 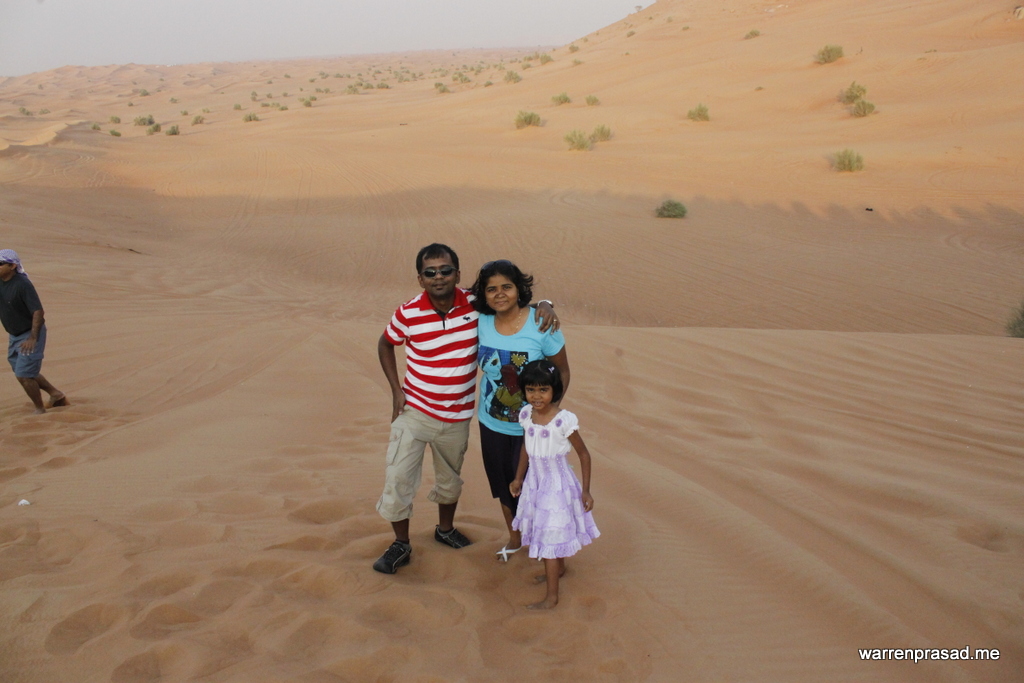 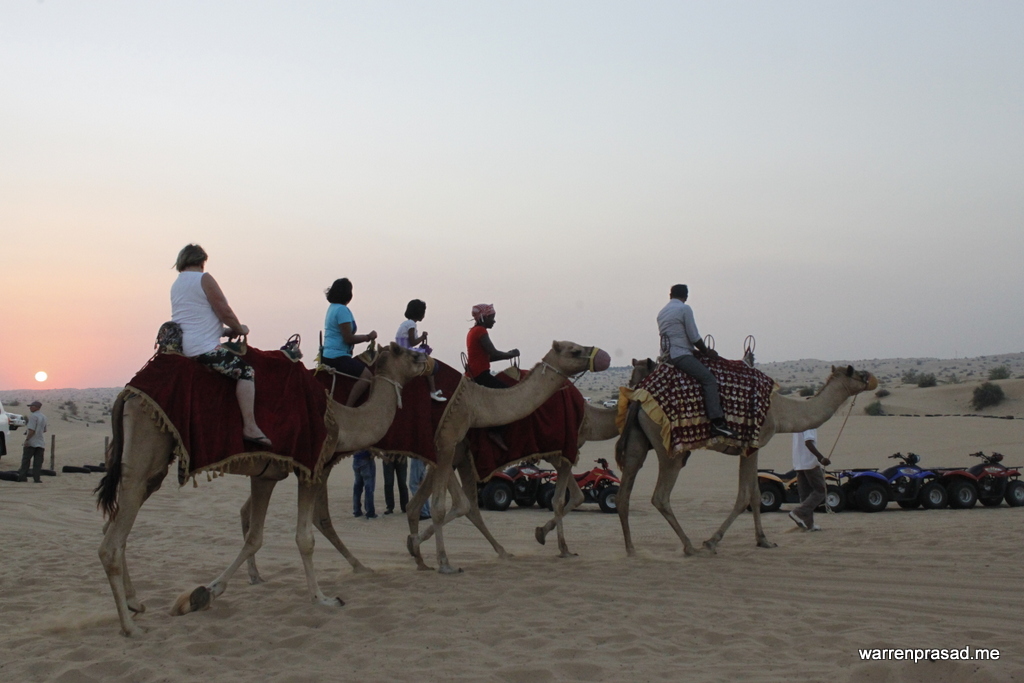 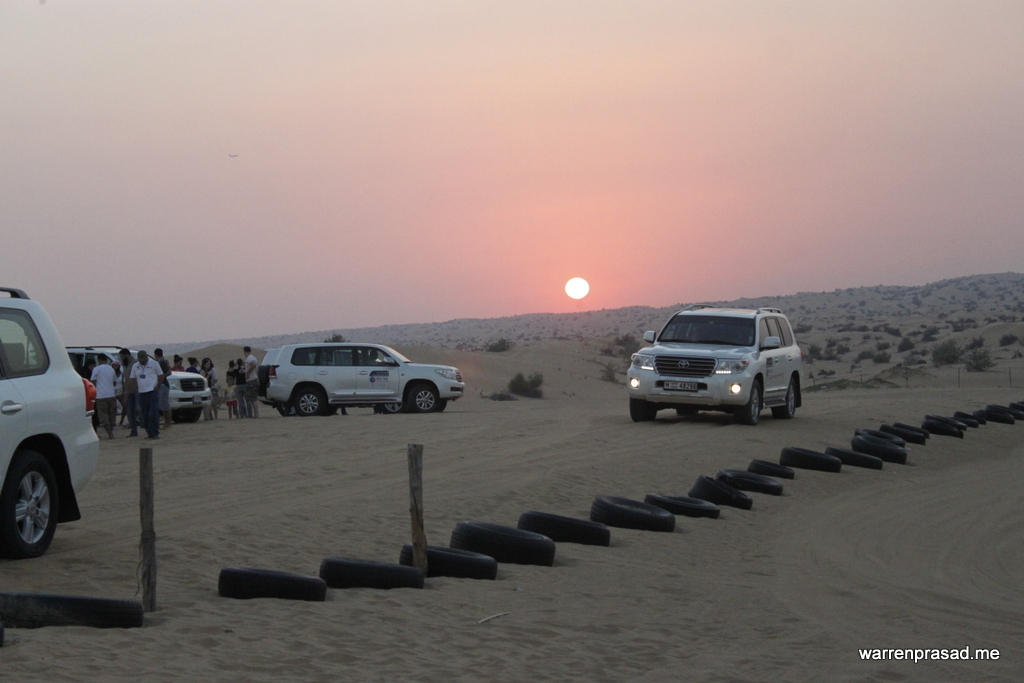 Desert Safari aka Dune Bashing is something you should not miss in your itinerary. You can book either an entire vehicle or share it with other travellers. We used a shared one. Fortunately we got an Indian driver and got special treatment. ;-).

We started at around 3PM and went around the city to pick up three more fellow travellers. Then we headed towards the forsaken land! A short stopover in a highway inn and then we headed towards the vast emptiness. The tyres were de-pressurized before rolling into the sands. After going almost 4-5 kms, the dunes came up. Then it started. A real life roller coaster. Next 60 mins was filled with thrill, screams, ups, downs, everything. Many times i felt the car would go turtle. (It was a Toyota Land Cruiser). When the bashing was over, we ended up in a desert camp far inside the desert. Then followed a series of performance including a belly dance and a middle-east dinner and then back home.

Whoa! it was finally over.

Date: 15th October 2013
Finally the desert odyssey has come to an end!

We had our returning flight from Sharjah. We packed our bag and left for SHarjah. 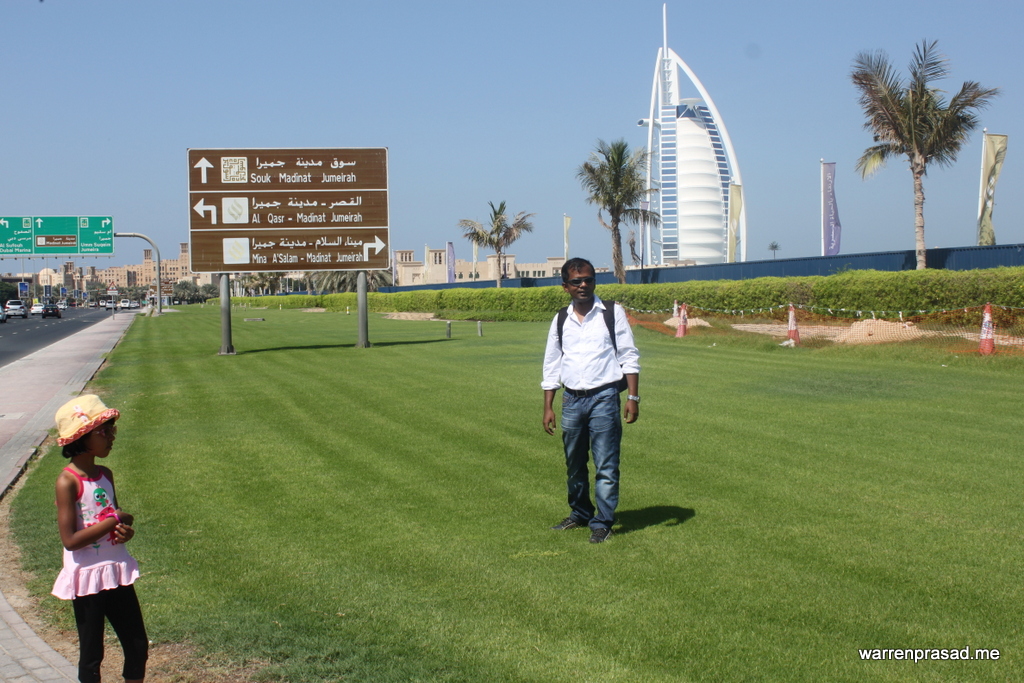 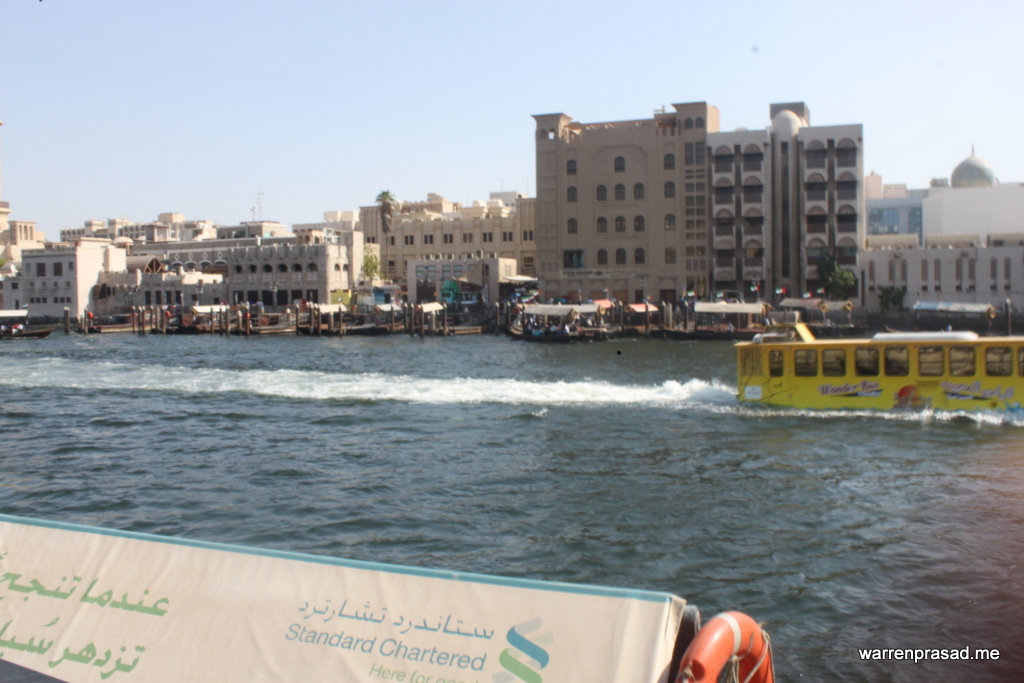